Civil Disobedience to Battle Back the Pipelines

Every month, inside the walls of glass and concrete of a Washington, DC, office building, the the

But there is a point when people get fed up and finally fight back. When they are forced to disobey unjust laws. “There comes a time when people get tired of being trampled over by the iron feet of oppression,” as Martin Luther King, Jr. put it. For many Americans, that time has come. And unless FERC ceases its ways, that time will come for many more. 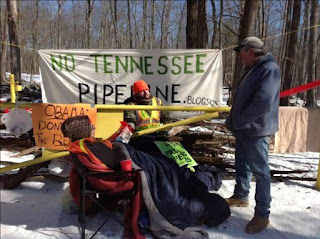 In January, FERC issued an order permitting a multinational company to seize and cut 80 percent of the trees in a forest in New Milford Township, Susquehanna County, Pennsylvania, and replace them with a natural gas pipeline. That forest has belonged to the Holleran family since the 1950s.  The property is where the Hollerans live and also where, each year, they tap 300 maple trees to make maple syrup, turning what was a backyard maple hobby into a family business, North Harford Maple.

FERC permitted the tree cutting even though the Constitution pipeline had not yet received a Clean Water Act approval from the state of New York, without which the NY portion of the pipeline cannot be built.

In the face of FERC’s tyranny, the Hollerans—and dozens of their neighbors—stood by their beloved trees as chainsaw-wielding men came to destroy the family farm. "This is our land and family business and we just staged our equipment to set up for this year's syrup production," said a member of the Holleran family. Police were called but refused to evict the family from its own land without a court order. 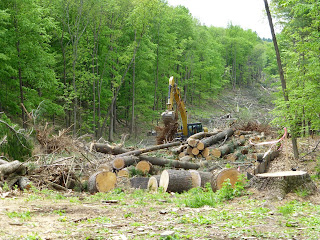 The Constitution Pipeline company then took the Hollerans to court to prevent the family and
community from defending their rights. A court agreed with the company, and soon the Hollerans’ land will be destroyed for a proposed pipeline that could devastate the surrounding environment and significantly contribute to the destruction of the planet.

Farmers, homeowners, land trusts, businesses, schools and towns across the nation are being threatened by natural gas pipelines like the Constitution Pipeline -- homes, livelihoods, businesses and lands are being decimated despite the staunch opposition of the property owners. Communities are rising up in opposition despite knowing that approval of the pipelines by FERC is virtually guaranteed – we know this because FERC has never rejected a pipeline proposal brought before its Commissioners for at least the last 40 years. If you saw a game where the hitter scored a home run every time he was at bat, you would know the game was rigged. Well, so is this one.

FERC’s abuses are rampant: they range from prohibiting the public from commenting during its meetings to sanctioning pipeline construction before companies even possess the required permits.

As a result, many families are forced to resort to civil disobedience. They do so not with pleasure but with reluctance. They do so knowing that disrespecting unjust laws shows the highest respect for just laws.

We cannot leave these families by themselves. They need allies willing to fight FERC.

Over 237 organizations from across America have stepped up to be just these allies: they have urged Congress to direct the Government Accountability office to investigate FERC and identify much-needed legal reforms.

But until and unless FERC respects the rights of people to their land, we will see more individuals 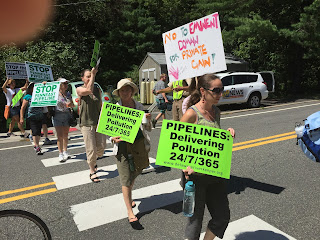 following in the footsteps of Dr. King. The Civil Rights Movement began with a few simple but brave, important acts: a refusal to change seats on a bus, a sit-in at a diner, a protest in support of equal access to good schools. Despite the many attempts to ignore, dismiss, and overshadow these acts, the Civil Rights Movement grew and the power of its message and substantive validity finally gained widespread acceptance and, eventually, lionization.

That is the path of today’s environmental movement. It reflects the growing opposition to drilling, fracking and all the infrastructure pipelines, compressor and LNG export facilities that are destroying communities and environments to service the fossil fuel industry. It isn’t going away.

What Can You Do To Help?

Support an Independent Investigation into the Abuse of Process and Law by the Federal Energy Regulatory Commission (FERC), Including Its Blatant Bias in Approving Pipeline Projects.
Send your letter to all of your federal senators and congressional representatives with just one click:  http://bit.ly/GAOFERC

In addition:
1
2      If you are the leader of an organization concerned about the abuse of power at FERC you can sign on to our organizational sign-on letter at: http://bit.ly/SignOnGAOReview

If you are an individual that wants to join the fight, please sign our petition and pass it on at: http://bit.ly/DRN-PetitionToReviewFERC

Posted by Maya K. van Rossum, the Delaware Riverkeeper at 8:33 AM