Countdown 11 – Getting Action & Standing Together on March 6 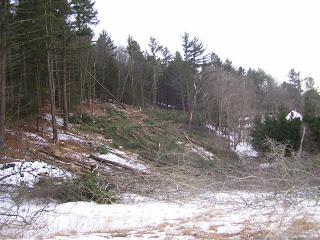 It has been a difficult couple weeks for the communities of the Upper Delaware River watershed, and beyond, where the Tennessee Gas Pipeline Company has been cutting a path for its Northeast Upgrade Project (NEUP).  Chainsaw gangs have been invading the forests, private properties and communities in order to do the tree felling which is the first step in their forced pipeline project.

In response, residents have been rising up – young and old – rural and urban.  Protests, vigils, rallies, blockades, watch-dogging the cutters, marches, as well as thousands of calls and emails to decisionmakers,  all  have been a focused commitment of our watershed community in order to protect the communities and mature forests under attack by Kinder Morgan’s Tennessee Gas Pipeline Company. “Gifford Pinchot”,  carrying forth his family’s honorable and long-standing commitment to protecting forests and trees, climbed up into the trees, to valiantly challenge the tree cutters and protect what piece of the forest he could.  Eventually the pipeline company forced him down – after 9 days. But his commitment to protecting the trees is honorable. 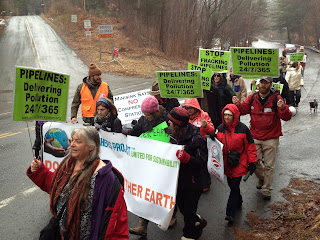 Meanwhile strategic  legal actions of the Delaware Riverkeeper Network grind on, as does the ongoing effort to prevent the Army Corps from issuing a freshwater wetlands permit the project needs.

More vocal and visible is the ongoing effort to demand the Delaware River Basin Commission  take the action it legally and morally should with regards to the NEUP and all pipeline projects.  Among the efforts building towards securing action by the DRBC, and focused on getting that action at their March 6th meeting were the following:

Recall in December, when there were similar but different pipeline requests that had been placed before the Commissioners and they suddenly, with no opportunity for public comment, a public hearing, and with no advance public notice whatsoever – suddenly voted against taking action.  We are not going to make the same mistake of trusting that the DRBC will treat the public with equity and fairness and give us an opportunity to be heard, in a timely fashion, before they render decisions that hurt us.  (For video to remind what happened:  http://youtu.be/QdjF8VDOYsg)

And so on March 6 we are asking you to come to the DRBC’s meeting and help us be heard before the Commissioners take a vote, or before they end the meeting without addressing the issue at all. Bring your friends, take off work, call in sick – join us for this important day for our water, air and communities.  We need you there.

People, communities, woodlands, wetlands, streams and the Delaware River are being hurt.

People are taking action, thank goodness.  But we need you to join the effort, if you are not already engaged and we ask that you get your friends engaged too.17 million people rely on the Delaware River Basin for their water – we need more folks to speak out and stand up and you have the power to make that happen – we don’t have the multi-million dollar budgets of the fossil fuel industry but we do have our voices and bodies.

There are 4 ways you can help right now:

2) Take a day and make your voice heard on this critical issue on March 6th at 12:15 in West Trenton— speak directly to the DRBC Commissioners or help us pack the room and support others who will be speaking:  http://www.delawareriverkeeper.org/about/event.aspx?Id=333

3) Send an email to urge DRBC to take immediate action on the upriver pipeline Tennessee Gas Pipeline Company/Kinder Morgan is imposing upon us.  Our neighbors up river are suffering and need our help to magnify their voice and get DRBC to act today:  http://www.delawareriverkeeper.org/act-now/urgent-details.aspx?Id=139

4) Sign the Pledge of Protection to let decisionmakers know that you are among the growing number of people willing and wanting to stand in defense of our River and all the communities that depend upon it, its waters, watershed, streams and irreplaceable ecosystems.  http://www.protectdelriv.org