Congress is promising fiscal restraint – they promise no more earmarks and no more wasted investments that won’t generate real economic benefits for our country.
Delivering on this promise mandates cancelling the earmark that is the Delaware Deepening.
The Deepening is an earmark:
Democrats and Republicans need to act responsibility and to ensure that every federal tax dollar spent will yield healthy communities and economies, not fulfill the political whims of some while damaging and threatening the good health and jobs of others as the deepening does.
No federal tax dollars have yet been spent on construction, only Pennsylvania has ponied up the money to serve the personal political needs of Governor Rendell.
Deepening Robs The Budget for a Failed Investment
The Government Accountability Office has three times challenged the claims of economic benefit from deepening – with the most recent report issuing just this past year, April 2010.   In this most recent report the GAO documented once again that the Army Corps has failed to provide Congress or the public with accurate, up-to-date, complete information regarding the economic ramifications of deepening and in so doing has failed to provide the objective assessment Congress needs to make an informed choice about continuing to fund the project.  This is in addition to a 2002 Report and 2006 Congressional testimony provided by the GAO characterizing similar concerns.
Assertions that deepening will inject millions of dollars into the region’s economies are peculiar claims considering that the Government Accountability Office has estimated the annual benefits of the project to be only $13.3 million. Even the Army Corps of Engineers is only claiming $32,645,000 of annual economic benefit (this according to their 2008 economic update.).
The fact is that there is nothing on the record to demonstrate or document that deepening will lead to the economic benefits claimed by project supporters.

It is also important to recognize that while at best the Army Corps is asserting $32 million of annual economic benefit from deepening, what is put at risk is economically worth far greater including, but certainly not limited to, $80 million a year from the oyster industry, $34 million a year from ecotourism associated with horseshoe crabs and migrating shorebirds, and the Delaware River portion of the region’s recreational fishing industries including New Jersey’s $630 million of annual economic benefit (a statewide figure but much of which can be attributed to the Delaware River).
Deepening Strips States Rights.

The project is the subject of major litigation in two federal district courts, being challenged by the State of New Jersey, the State of Delaware and 5 environmental and community organizations for failure to comply with 6 federal environmental laws as well as state legal obligations and permits.  Considering the depth and breadth of the legal challenges at issue it is most appropriate for Congress to ensure that federal environmental laws and States rights obligations are fulfilled before it aids in the forward movement of the project with additional funding.
The Constitution and Federal Law are carefully designed to protect the sovereign rights of States to oversee and/or affect projects that have impacts within their borders.  Protecting this balance of power is essential for the proper implementation of law and for the proper protection of citizens.  Actions and decisions that affect this balance of power have ramifications far beyond the debate of whether to deepen the Delaware River’s main navigation channel.  Continued federal funding in the face of these legal battles directly pits the federal government against the rights of our states to uphold their laws and enforce applicable federal laws.
Deepening Is a Threat that Costs – Costs Health, Safety, Jobs and the Taxpayer Dollars it Will Cost to Restore the Damage to Come.
Environmentally, deepening the channel changes the movement and balance of fresh and salt water in a way that will move the salt line up river, threatening drinking water supplies and other community harms.
A moving salt line is a major threat to the oyster populations of the Delaware Estuary – including threatening the reintroduction of parasites and disease that decimated their populations in the recent past.  Oysters are vital to the ecology of the Delaware.  Oysters act as a vital food source and are important filters for pollution found in Estuary waters. Oysters of the Estuary are also economically important. The annual harvest of oysters from the Delaware Estuary are expected to generate up to $80 million of annual economic benefit for the region. In recognition of the economic, job and cultural importance of the Delaware Estuary’s oysters they have been the recipient of over $6.5 million of public restoration funds and resources.
The Delaware Bay is home to the largest spawning population of horseshoe crabs in the world irreplaceable for supporting migratory birds and a $34 million boost to the region’s ecotourism industry. Nationally, horseshoe crabs represent a substantial benefit to the biomedical industry, to which one pint of Horseshoe Crab blood is worth $15,000 for required testing on medical devices, vaccines and intravenous drugs used by all, representing $150 million of annual revenue and social welfare value. The deepening project directly threatens the horseshoe crabs and as a result is also a threat to dependent migratory birds and associated ecotourism. 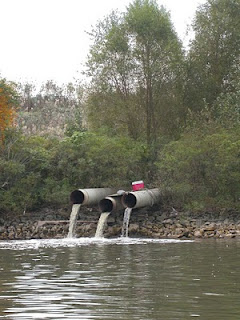 According to experts, deepening and associated spoil disposal will introduce heavy metals, pesticides, and other toxins into the environment.  And will cause the washing away of wetlands important ecologically and for storm protection.  It also is a direct and immediate threat to the Atlantic Sturgeon populations of the Delaware River – a population that once supported the largest caviar industry in the country – and could again if allowed to recover (potentially over $400 million of economic benefit here).
Earmarks of this kind – that threaten harm to our economy and region, have no place in a fiscally responsible government.
Neither the House of Representatives nor the President included funding for the project in their proposed budget – nor have they in the past 3 administrations.  There is a strong recognition that earmarks have allowed bad projects to move forward – projects not worthy of taxpayer dollars but instead given for political gain or interests.  President Obama would be the first to budget for this project in well over a decade if he were to succumb to the political pressures of the defeated Senator Specter and to Senator Casey.  Better he support the good works of respected Senator Lautenberg, Menendez, Kaufman and Congressmen Andrews and Lobiondo on the matter and continue to oppose funding for deepening.
The Delaware Deepening is a major threat to our River and region.  It should not continue to receive the casual funding that has kept it alive and unjustified all these years.
Posted by Maya K. van Rossum, the Delaware Riverkeeper at 7:30 PM No comments: