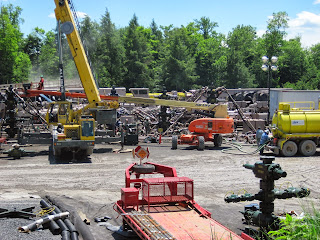 We are hearing a lot today about making shale gas drilling safe.  The problem is that this statement
starts from a false premise – that you can make this highly destructive industrial practice safe – the truth is you can’t make it safe.  There are so many destructive elements of shale gas development that even if you remedy some or all of the harms of one element of the process there are many more to do harm.  And at its core shale gas is just another fossil fuel that will emit global warming emissions and prevent this country from quickly transitioning to better sustainable energy options like solar.

It requires 2 to 9 million gallons of water to frack a well.  Over 80% of this water remains under ground, removing it from our water cycle and use by present and future generations for drinking, bathing, growing crops, and supporting nature.   In just about 1/3 of the Delaware River watershed experts said there could be as many as 64,000 wells.  If only 50,000 of those were drilled at an average of 5 million gallons per well that means 250 billion gallons of water used and 200 billion trapped under ground, just from that one portion of one watershed.

To that water is a confidential recipe of chemicals, many toxic, such as hydrochloric acid, muriatic acid, biocides, glutaraldehyde, and ethylene glycol.  While the industry loves to say that only ½ to 2% of the frack fluids is these chemicals, in just one frack job of 5 million gallons that still adds up to 25,000 to 100,000 gallons of chemicals – that’s a lot!  Once that frack water circulates under ground as part of the fracking process it picks up other contaminants from the earth’s geology such as Barium, Strontium, Benzene, Toluene, Mercury, Methane, lots of total dissolved solids that can make the water as much as 5 times saltier than sea water, and Radioactive Materials including Uranium–238, Radium-226 and 228, and Thorium–232.  So the pure water originally drawn from surface water streams and fresh underground aquifers becomes highly, highly contaminated.

The water that remains under the earth has the potential of polluting underground water supplies in the short term or the near term, either by flowing through existing or created cracks in the geology over time, or by climbing to our freshwater aquifers through failing casings of the boreholes drilled.   The cement and steel used to case the boreholes to prevent contamination themselves have a limited life of only 80 to 100 years in the best of circumstances, so pathways through the boreholes are just a matter of time. But when they fail, pollution can be almost instantaneous and the damage is essentially irreversible. 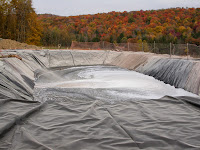 toxified and yet most of these wastes are exempt from regulation under our hazardous waste laws, and we do not have good technology or treatment plants for handling the waste.  As a result, a major strategy for disposing of frack waste is to find a sealed underground cavern for disposal – once again taking that water out of the natural cycle.  Waste that has been taken for disposal at water treatment plants is creating other concerns because of the lack of technology for proper treatment --  for example, contaminating streams with radioactive material.  Sediments in Blacklick Creek in Pennsylvania were recently found contaminated with radium at concentrations 200 times above background level downstream of just such a wastewater treatment plant where frack waste had been discharged.  This is above radioactive waste disposal threshold regulations and raises the specter of the bioaccumulation of radioactivity in fish and the food chain.

Accidents during the drilling and fracking process are inevitable. In 2011 alone, the Pennsylvania Shale gas development consumes not only vast quantities of water but also acres of land for well pads, pipelines, and access roads.  Prior to drilling, space must be cleared and graded to construct the well pad and to accommodate all necessary equipment.[1] Each well pad requires the clearing and grading of, on average, 3.1 acres, while the construction of associated infrastructure (access roads, impoundments, pipelines, and compressor stations) necessary for future well site construction, drilling, and gas exportation consumes another 5.7 acres, for a total of almost 9 acres per well pad.[2] 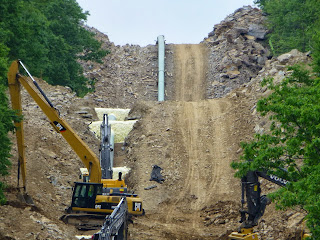 In Pennsylvania, the Nature Conservancy has estimated that nearly two-thirds of well pads targeting the Marcellus Shale will be developed in forested areas, necessitating the clearing of 38,000 to 90,000 acres.[3] An additional 60,000 to 150,000 acres of forest area will be lost to pipeline construction and right-of-way maintenance in order to accommodate the delivery of the gas from well site to end user.[4] Compressor stations along the pipelines, which occupy an average of five acres each, are likely to number in the hundreds.[5] In New York, deforestation will occur on a similar scale, with losses in forest cover of up to 16% says the Nature Conservancy.[6]

Heavy truck traffic on rural roads, especially unpaved roads, that were not built to withstand hundreds or thousands of truck trips also leads to significant erosion, sedimentation and community problems.

Contrary to the folk tales the gas companies spin, shale gas development is not about energy independence, increased jobs, or protection from climate change.  Currently there are at least 20 applications for liquefied-natural-gas (LNG) export facilities in the U.S. pending before the federal government.[7] The gas companies want the exports overseas because they can sell the gas for more than 4 times the price as they can capture here in the U.S.

It is almost daily that new research emerges showing the harms of shale gas for our communities, our country and our earth.   Among the most recent scientific findings is that as much as 9% of the methane[8] -- one of the most potent greenhouse gases known to man -- produced while drilling for gas is lost to the atmosphere.  That 9% coupled with all the methane emitted during the transport of gas through pipelines, storage and use of the gas means that shale gas is a more potent contributor to climate change than any other fossil fuel – 21 to 33 times more potent than carbon dioxide if you look over a 100 year period; if you look over the next 20 years when it is the most crucial that we reduce damaging emissions it is over 72 times more potent.[9]  So shale gas, when you take into consideration all of the construction activities, including truck trips burning dirty diesel, compressor stations, deforestation and the release of methane to the atmosphere is increasingly found to be not better than coal  -- and no matter how you slice it is certainly not better than solar or other sustainable options – for saving us from climate change. 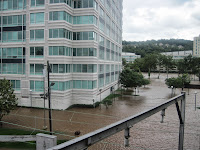 Creating “green” fracking fluids, reusing frack wastewater to the degree it can be, reducing leaks in pipelines to try to reduce the release of methane, for example, cannot and do not avoid the array of harms and vast levels of devastation shale gas development inflicts.  It’s not a matter of managing the harm – in the parlance of best management practices – because the damages are uncontrollable and inevitable.  The only truly safe path is to abandon the folly that is shale gas and fracking and instead to invest in truly protective and reliable energy options such as solar and other sustainable options.


Posted by Maya K. van Rossum, the Delaware Riverkeeper at 11:06 AM