Economically, ecologically, for jobs and/or protection of the public Deepening the Delaware River is not a good idea.  And now there is a new report which, using the Army Corps’ own findings, demonstrates that this project is a big loser for the taxpayers – just as was found based on GAO findings years ago, every dollar invested in deepening brings less than a dollar back.  Environmentally the project is a major threat to our River and region, economically it is a worse than a wasted investment.
The Government Accountability Office has three times challenged the claims of economic benefit from deepening – with the most recent report issuing just this past year, April 2010.   In its most recent report, the GAO documented once again that the Army Corps failed to provide Congress or the public with accurate, up-to-date, complete information regarding the economic ramifications of deepening and in so doing failed to provide the objective assessment Congress needs to make an informed choice about continuing to fund the project.  This GAO report followed a 2002 Report and 2006 Congressional testimony provided by the GAO characterizing similar concerns.  Each report was followed by a quick “upgrade” by the Army Corps, and each “upgrade” was soundly refuted by experts and followed up by subsequent GAO actions mentioned.
In apparent response to the GAO 2010 report the Army Corps conducted and released its 8th economic analysis of deepening.  It is noteworthy that the Army Corps never made this document publicly available until the Delaware Riverkeeper Network learned of its existence and requested it via the Freedom of Information Act.  The Delaware Riverkeeper Network has had the nationally recognized expert, Dr. Robert Stearns, review the report and based on the information it contains it is clear that deepening the Delaware is unnecessary to serve the ports and a detriment to the taxpayers that would be expected to pay for it.
Dr. Stearns found basic, fundamental flaws in the analysis done by the Army Corps which prove their positive economic claims for the project are severely over-inflated.  In short, merely correcting for a fundamental and basic economic analysis claim identified by Dr. Stearns, the benefit cost ratio for the project falls to a mere 1.1 to 1, i.e. at best one can claim 10 cents of net taxpayer benefit for every dollar invested in the Delaware River deepening project.  When additional errors are taken into consideration, this figure will fall even further, supporting a conclusion that when accurately assessed the Delaware Deepening project yields less than $1 of benefit for taxpayers for every $1 spent on it – i.e. it is a net loss for the taxpayers and therefore cannot warrant the nearly $300 million it requires for construction.  And this is without even considering the wealth of environmental harm and damage to river-dependent jobs that will result if this project is allowed to move forward.
In addition to Dr. Stearns findings, there are additional findings documented in a supplemental report which further demonstrate the economic failings of the project and document why it must be soundly rejected by fiscally-minded elected officials seeking to ensure the proper use and investment of tax dollars during these hard economic times.
In the supplemental report we point out:
·      That the Army Corps continues to fail to acknowledge all of the oil facility closings in its calculations;
·      That the Corps claims benefits from the broadkill beach spoil disposal portion of the project and yet Delaware and the US Fish and Wildlife Service have documented the project is a harm;
·      That when the Army Corps dredged the 12 miles known as reach C they found they had underestimated the spoils to be disposed of by 38% -- apply that to the project as a whole and we have a lot more spoils which means more cost and harm, none of which the Corps includes in its analysis;
·      That the Army Corps’ analysis claims to update the benefits of the project but does not attempt to update the costs – thus giving a skewed picture using a mixture of time frames.
When all of these are included, the case against this project gets even more rock solid.
Considering the lack of benefits, there can be no argument for accepting the level of environmental harm deepening brings.
What is at risk? 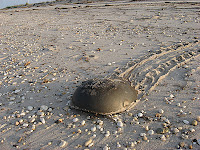 Oysters, horseshoe crabs, shorebirds and the hundreds of millions of dollars economic benefit dependent upon them.  Including in the biomedical industry that needs healthy and growing horseshoe crab populations for testing that protects us from poisonous vaccines.
Even with the Army Corp’s false analysis, at most for this nearly $300 million dollar expenditure, the Corps is talk about just over $13 million of benefit a year.
The jobs and income associated with the River that are put on the line by this project are valued at far more, for example:
$80 million of economic benefit a year associated with oysters,
$34 million with birding,
$150 million with the biomedical industry
Also at risk are: 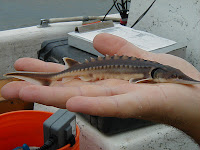 Endangered species including the atlantic and shortnose sturgeon which need protection from extinction but also, who if allowed to rebound would themselves supports hundreds of millions in jobs and economic benefits as they did in our region’s not so distant past.
The marshlands that protect our coasts and coastal communities.
The quality of the river from both contaminants and increased salt water intrusion to unnatural levels that put at risk drinking water, fish and other important communities.
The Army Corps has misled congress and the public about this project time and time again.
When it comes to the fact that the Army Corps has tried to deceive us once again you don’t’ need to take our word for that – just take the word of the army corps – Bob stearns found it right in their own reports – again!
The project is a proven loser.
Assertions that deepening will inject millions of dollars into the region’s economies and create tens of thousands of jobs have not been the subject of any reports or reviews made available to the public or the experts for considered review.  Even the Army Corps estimates only $13.65 million of net annual economic benefit—a rather small sum when one considers the associated harms and that these benefits are the result of economic efficiencies, not increased goods or jobs.
The fact is that there is nothing on the record to demonstrate or document that deepening will lead to the immense economic benefits claimed by project supporters; even the Corps refutes their claims:
The Army Corps has stated that the “mix and volume of cargoes coming to the benefiting terminals will be equivalent for the current 40 foot or the proposed 45 foot channel depths. There is no induced tonnage as a result of the deepening project.  … The future volume of cargo passing through the Delaware River port system is determined by … factors that are not affected in any measurable way by the channel depth.”
Don't Deepen the Delaware -- Write your Congressman today!
Posted by Maya K. van Rossum, the Delaware Riverkeeper at 12:56 PM