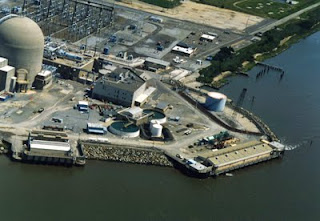 The Salem Nuclear Generation Station is the single largest predator in Delaware Bay. It is allowed to kill indiscriminately on a daily basis. Every year Salem kills over 3 billion Delaware River fish including:

This is no small impact, not to the River and not to the commercial and recreational fishermen who are subject to size and catch limits while Salem is allowed to continue killing indiscriminately.

If Salem were retrofitted with cooling towers it could reduce those fish kills by 95% -- 95%!!!!

But rather than invest in this existing and proven technology, the plant's owners have spent years fighting the requirement legally.

Now, there is an effort to extend the life of Salem, originally scheduled to shut down in just a few short years, by another 50 years.

This is about whether or not to stop the needless fish slaughter.

At this point there are two ways to stop it -- shut down the plant on time or put in place cooling towers.
Posted by Maya K. van Rossum, the Delaware Riverkeeper at 8:01 AM