November 21 -- Speak Up For Your Community; Stand Against Gas Drilling 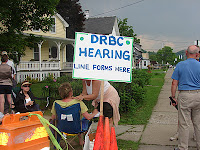 November 21 is an important day for Delaware River communities, for the citizens/families of Pennsylvania, New Jersey, New York, and Delaware, and for the future of our country.  Wow, that’s a big day? you might be saying.  What could possibly be happening? you might be asking.
November 21, in Trenton, NJ, the Governors of the four states and a representative for the President will decide how much they value life – or whether they value corporations and political contributions more.  On November 21 they will be voting whether to open the Delaware River watershed up to gas drilling or not.
Contrary to the slick marketing campaigns of the shale gas companies,  drilling makes communities sick.
The drilling and blasting  used to get the gas, consumes, permanently, billions of gallons of our finite freshwater, locking it underground and poisoning it with dangerous toxins such as arsenic, lead, mercury, benzene, m,p-Xylene, barium, chromium, radium, and strontium..  The drilling, blasting and fracking release benzene, toluene, sulfur dioxide, hydrogen sulfide, carbon monoxide, lung-irritating particulates, volatile organics and more into the air we breathe.
In just a three month period this year  Pennsylvania papers reported an explosion in a water well that forced a family from their home because of nearby drilling; drinking water wells for three homes in one community and  7 homes in another community contaminated because of drilling, as well as methane bubbling up through the Susquehanna River; a driller fined for an hydraulic oil spill that polluted the soil, and another company fined for discharging drilling poisons into two high quality creeks; two workers injured in an explosion at a gas drilling site; a blowout at a well site dumping thousands of gallons of drilling waste on farm lands, into creeks and forcing 7 families to evacuate.  During this same period Cornell University published areport documenting that fracking contributes to global warming as much, or even more, than coal and Duke University published a paper analyzing the increased contamination found in groundwater of homes located near drilling rigs.
Mothers, fathers, doctors are coming out talking about their children that have been harmed by drilling– children suffering nose bleeds, headaches, high levels of dangerous substances in their blood.   The stories are heart wrenching.


Government is supposed to protect the people.  On November 21 there is an opportunity to protect from gas drilling the 15 million people who drink Delaware River water, and the millions who breathe the air, eat the fish, and feed from the lands in the River’s watershed.