The Delaware River attracts visitors from all over the world to spend money and support business up river and down.
When we keep our River clean and full flowing it provides those who live here
•                clean drinking water,
•                healthy food,
•                memorable recreation,
•                good paying jobs,
•                strong local economies, and
•                unparalleled quality of life.
The gas drillers claim they will bring us better jobs and income at little or no cost.
They also try to pitch this as a property rights fight.
This is about rights, we agree, but it is about the right to life, and the rights of a community to ensure that no piece of property is used in a way that hurts the rest of the community.
It is also about jobs – the jobs the gas drillers will take from hardworking people today, and the jobs they will rob from future generations.
With the drillers come big costs – for our River, for our region and for our communities.
Drilling will leave us a legacy of pollution and environmental degradation that will have to be cleaned up by everyone else, i.e. by the taxpayers.
Gas drilling brings with it:
•              Toxic pollution to our air and water – that will last generations
•              It robs us of fresh, clean water in the rivers and streams that we drink and eat from, swim and fish in.
•             It will decimate forests that protect us from pollution and flooding, and that are vital for recreation, ecotourism and economic investment.
•             Gas drillers bring trucks, generators and bright lights by the thousands which create unending noise, traffic, and pollution disturbing and sickening our communities and taxing our community infrastructure.
•             Drilling brings overwhelming odors and
•             Too often it brings fires, explosions and toxic spills that damage and threaten our communities and environment, and that burden local responders with emergencies they aren't equipped for.

The gas drillers will take from our children the natural, cultural and historic heritage that our region is known for.
Gas drilling cannot wean the U.S. off its dependence on foreign oil. In fact, much of what they extract is planned for shipment overseas to places like China, Japan, Norway, France, India.
Gas drilling contributes to global climate change, it does not make it better. When you consider the drilling process from cradle to grave:
•              Drilling (extraction, collection and distribution) emits vast amounts of methane, VOC, NOX and other emissions that are major contributors to GCC.
•             Construction of each well is estimated to require at least 1400 truck trips, each fueled by dirty diesel. With estimates of 10,000 to 50,000 wells for our upper Delaware you can see the magnitude of this pollution and traffic harm.
•             Construction of the wells, transmission pipes and needed roadways – means the loss of forests which are natural carbon sinks.

Destroying the health and image of the River will drive businesses away from our communities.  Businesses increasingly look to settle in attractive and well renowned communities.  If we lose our River, we lose our cache, and we lose this attraction for big business.
Gas drilling also puts at risk ecotourism and river jobs.
Ecotourism is a fundamental mainstay of many Delaware River businesses and communities.
In just one year the Upper reaches of the Delaware River brought to local communities over 367,000 whitewater paddlers, who spent over $20 million, contributed almost $10 million to our local economies, and supported 447 jobs.
There are 20 canoe liveries that operate along the Delaware. Some employ as many as 200 people. With an annual attendance of over 60,000, one livery alone can create gross revenue of more than $3 million a year for our region -- just one livery.
Trout fishing in the Upper Delaware resulted in $17.69 million in local business revenue in a single year. This revenue supporting 348 jobs, providing $3.65 million in wages and $719,350 in local taxes. This investment translated into an ongoing $29.98 million in local economic activities.
River festivals up and down the River draw crowds. Lambertville’s shad festival draws 30,000 to 35,000 to that community just for one brief weekend generating tremendous amounts of business.
In PA, NY an NJ wildlife viewing alone generates an estimated $1 million in retail sales, $623 million in trip related sales, $217 million in federal and state taxes and supports 35,000 jobs a year. Nature viewing only succeeds when there are healthy habitats and clean streams that sustain wildlife and beautiful views for the visitors.
In Philadelphia and beyond restaurants and hotels market themselves based upon their river views and river access. Some hotels charge over $100 more for a room if it faces the River.
Boating on the Schuylkill and Delaware Rivers – rowing, paddling, and motorized boats are a big attractions – bringing visitors and business. The Schuylkill has hosted over 20 regattas in a single year – some bringing 1,400, 3,000 even 5,000 visitors each from all over the country to enjoy and spend in and around Philadelphia.
The pollution, water withdrawals and massive land disturbance the drilling will bring does damage to these businesses, jobs and economic attractions – both through direct harm and indirect harm by harming the perceptions of the health and beauty of the River.
Protecting and restoring the ecosystems of the Delaware River is not just of economic import, but is also important to the health and safety of our region.
Woodlands and forests protect us from flooding and flood damages by absorbing the water that otherwise runs off and floods us. Tree cover has saved communities billions of dollars in infrastructure that would otherwise be needed to manage stormwater runoff and prevent flood damages. Trees in just four of our tributary watersheds saved a combined $6 ½ billion in otherwise needed infrastructure.
Communities along the Delaware already suffer from catastrophic flooding and damages. Gas drilling will remove vast areas of trees and compromise vast areas of floodplain making the danger of catastrophic flooding for communities worse and more frequent.
As for drinking water, Philadelphia and New York City both well know that protecting the watershed that is the source of drinking water is the most effective and cost efficient way to protect water supplies. Every dollar invested in watershed protection can save a community between $7.50 and $200 in costs for new water treatment facilities.
New York City has invested 1 to 1.5 billion dollars to protect the Upper Delaware, the source of its water supply. The alternative treatment plant option would have cost the City $10 to $20 billion.
Philadelphia too is investing to protect its drinking water source.
The drillers put all this at risk with the pollution they create, the glutinous quantities of fresh water they withdraw, and the destruction of the green infrastructure that is the basis of all this clean water and economic prosperity.
As recently as September 24, 2010 the DRBC put the region in drought warning and directed needed reservoir releases to ensure flows for Philadelphia and other communities. If we allow the gas drillers to take from us the hundreds of millions of gallons needed to feed their drilling operations we make these kinds of conditions worse. Remember, we are talking 10,000 to 50,000 wells at an average of 4.5 million gallons of water per well for fracking.
The Delaware River Basin Commission (DRBC) has determined that natural gas extraction is a threat to the water quality of the Delaware River. As a result it is developing natural gas specific regulations and gas production wells in the watershed are on hold until those regulations are adopted.
DRBC should soon be getting federal funding to study the cumulative affects of natural gas drilling.  This study needs to be completed and used as the basis for the new DRBC regulations.
Right now the DRBC is planning to do it backwards – to create their regulations and so allow drilling first, and do the study of the harms of gas drilling later when it is too late to take advantage of its findings.
The DRBC needs to hear from us all that they doing it backwards means irreparable harm as the result of ill informed regulations. We need you to tell the DRBC that the City doesn’t want to see gas drilling regulations being drafted or drilling to start until the environmental and community harms analysis has been done first.  Go to the action page of the Delaware Riverkeeper Network website to get your letter in -- www.delawareriverkeeper.org. 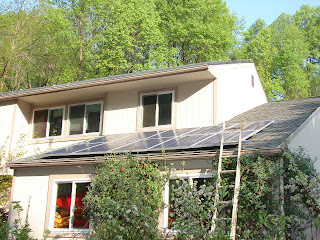 And as a community we need to stop focusing our energy on new ways to extract damaging, polluting fossil fuels and start focusing on sustainable, environmentally friendly sources of energy.  My husband and I invested in both solar and geothermal at our home in May and are reaping tremendous rewards. We aren’t polluting when we turn the lights on in our house, the amount of money we are saving each month is immense, we are fully powered, without being an environmental and financial burden on our community or the future of our children.
That is our future – sustainable energy – not the devastations brought by natural gas -- at least that's the way it should be.
Posted by Maya K. van Rossum, the Delaware Riverkeeper at 2:08 PM