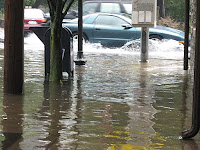 A new report was released today, Monday May 24, 2010, (New Jersey Stormwater Management Implementation – A Case Study of Hamilton Township) which documents:
The report contradicts the findings of Governor Christie's Red Tape Review Group regarding the state stormwater program.  In Appendix H the Red Tape Review Group said there was a duplication of responsibility and effort by the DEP and the municipalities in the implementation of the stormwater program and that perhaps the DEP should be pulled out of the review process.
This new report demonstrates that DEP absolutely must not be taken out of the review and implementation process of new Jersey's stormwater regulations.  The law, as currently written, is only flawed because it isn’t being fully or properly implemented and enforced, both at the municipal and state level.
Responding to concerns about the stormwater program the Delaware Riverkeeper Network hired 4 consulting firms to review a series of projects in Hamilton twp -- they looked for completeness, accuracy and compliance with the stormwater law.

If the NJ Stormwater regulations were implemented as they are written, with both the state and municipalities participating, NJ communities would save and make money.
For example, vegetated buffers, an important strategy that results from implementation of the NJ stormwater regulations,

Just  3 weeks ago the Delaware Riverkeeper Network issued another report – “River Values, the Value of a Clean and Healthy Delaware River” in which the organization documented that protecting our streams and rivers, with a particular focus on runoff issues, brings to our States and region irreplaceable jobs, economic revenue, tax benefits, and increased safety from illness, physical harm and from economic harm.
The Red Tape Review Group has it wrong – we need a strong stormwater program to protect the jobs and economies of New Jersey.  The way to get that in New Jersey is for the state to provide complimentary reviews and needed oversight so as to ensure full enforcement of the regulations we already have on the books.
When we leave the program in the hands of municipalities alone, the results can be abysmal failure, as is illustrated by the problems documented in the Hamilton Township report.
State participation in NJ’s stormwater program is not redundant, it is necessary!
Posted by Maya K. van Rossum, the Delaware Riverkeeper at 2:31 PM